A new type of surgical glue. 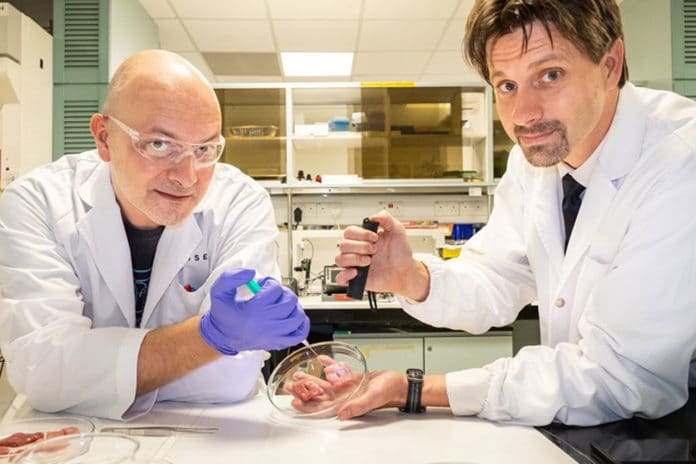 A new type of surgical glue developed by scientists from Nanyang Technological University, Singapore (NTU Singapore) can help join blood vessels and close wounds faster. Known as CaproGlu, the glue can bond soft tissues, including muscle and blood vessels, even when their surfaces are wet.

The glue is actuated by a low UV light dose that cures it in seconds, diverting it from a liquid paste into a solid but flexible biorubber.

During experiments with animals, scientists showed that blood vessels could be rejoined with just four stitches and a mesh wrapper dipped in CaproGlu, compared to the usual eight stitches required for a reliable and unobstructed join.

According to scientists, the CaproGlu will reduce surgery time by 25 percent, as surgeons spend less time and effort stitching up blood vessels and tissues.

Besides joining blood vessels and close wounds faster, the CaproGlu can also deliver local anesthetics or pain relief medication to tissues in the body. It is a one-pot liquid gel solution that comes ready-to-use.

Lead author of the paper, Associate Professor Terry W.J. Steele said, “To make our light-activated glue work on wet tissues, we engineered our glue first to remove water from the surface and thus allow adhesion to the dehydrated surfaces. This unique advantage of being able to bond with high strength in a wet environment, as well as being biocompatible, is what makes CaproGlu so suitable to be used in surgery and medical applications.”

The CaproGlu comprises two ingredients into a single-component formulation that does not require additives: polycaprolactone and diazirine. Polycaprolactone is a biodegradable polymer that has been approved by the United States Food and Drug Administration for specific applications used in the human body. And diazirine is a light-sensitive molecule that can form strong bonds when activated.

During experiments, scientists used CaproGlu as part of a new surgical method. They also used sutures in combination with a glue.

Instead of the conventional eight stitches needed to join the two ends of a blood vessel in a rabbit, they used four stitches. They wrapped the vessel ends with a biodegradable mesh dipped in CaproGlu and cured with a small UV light dose that crosslinked the amino acids on the tissue’s surface.

As a result, the bleeding from the artery immediately after the procedure was comparable to what is observed from conventional stitches. When harvested seven days later, the artery was shown to have completely healed.

Scientists noted, “There were no discernible side effects to the animals. It is safe and biocompatible as expected.”

“Since the bioadhesive dissolves and resorbs within weeks, no follow up clinical visits would be required for its removal.”

Study unveils how the process of wound healing begins

This hormone causes women to experience more pain than men