The world says goodbye to the original kilogram

On 20 May 2019, World Metrology Day, the world says goodbye to the original kilogram as the redefinition of the SI base units come into force 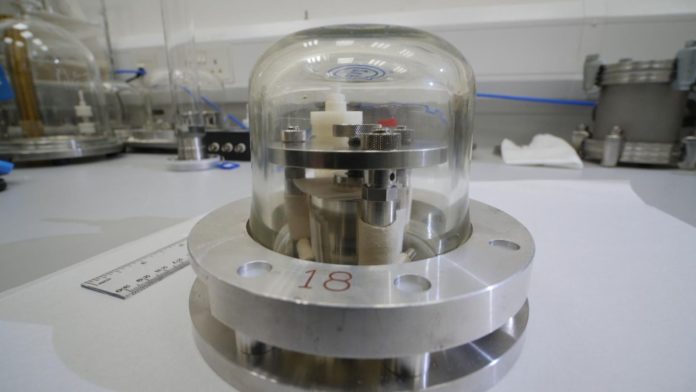 The world says goodbye to the original kilogram today, on World Metrology Day, after representatives from around the world voted to base the kilogram on fundamental constants of nature rather than rely on the original, physical kilogram, which is stored in a vault in Paris.

Although in everyday life it will appear that not much has changed, the redefinition of the kilogram will ensure that it remains stable, and will enable far more accurate mass measurements in the future. The kilogram will now be defined using a fixed value of the Planck constant and will be maintained using a Kibble Balance – a device invented in the UK that measures mass using electromagnetic and quantum techniques.

Since 1889, the kilogram has been defined by a metal block in a high security vault in Paris known as the International Prototype Kilogram (IPK), or ‘Le Grand K’. In November 2018, the global measurement community voted to redefine the International System of Measurement (SI) units, changing the world’s definition of the kilogram forever. Other SI units the kelvin, the mole, and the ampere will also be redefined.

Until today, different countries used their own ‘Prototype Kilograms’ that served as national standards and were calibrated back to the original prototype. This system ensured that mass measurements were traceable back to the same standard, from kitchen scales to gym weights, ensuring consistency around the world. However, the IPK is susceptible to damage and environmental factors, and is compared to its copies only once every 40 years, making calibration extremely difficult and potentially inaccurate. Tiny margins of error are acceptable when it comes to measuring a bag of sugar for example, but for sophisticated science more precise measurements are required.

Until today, the kilogram was the last of the 7 base SI units (kilogram, ampere, kelvin, mole, metre, second and candela) still defined by a physical object. The new definition of the kilogram is based on the Planck constant – a constant observed in the natural world, which is inherently stable. The new system allows physical kilograms to be checked using a Kibble Balance anywhere and at any time, making the definition more accessible. The Kibble Balance was first developed at the UK’s National Physical Laboratory (NPL) by the late Dr Bryan Kibble, making the redefinition possible.

“The redefinition of the kilogram may seem like a small change, but it will have an enormous impact on science going forward,” said Dr Ian Robinson, NPL Fellow, who worked on the development of the Kibble Balance with Dr Bryan Kibble at the National Physical Laboratory. “There will be no change to the mass scale currently used in trade and industry, but by using a universal constant of nature to ensure the long term stability of the kilogram, we are both reunifying the SI and setting the stage for robust, reliable science that could pave the way for new ideas and inventions. The present UK National Standard Kilogram will still be used to maintain the mass scale for the UK, but instead of deriving all mass calibrations from the IPK, in future, calibrations will be made using validated measurements from one or more Kibble balances. This will ensure that the UK continues to benefit from a well maintained, robust and stable mass scale.”

Dr Richard Brown, Head of Metrology at the National Physical Laboratory, said “The definitions of the base units are now formulated in a way that allows us to turn future advances in technology directly into improvements in the accuracy of measurements, also allowing more direct access to the benefits of the new definitions for end users. The revised SI future proofs our measurement system so that we are ready for all future technological and scientific advances such as 5G networks, quantum technologies, and other innovations that we are yet to imagine.”

Other SI units the ampere, kelvin, and mole will also undergo redefinition today, and will from now on be based on the elementary charge (e), the Boltzmann constant (kB), and the Avogadro constant (NA) respectively. This will not only impact on scientific discovery and innovation, but industry and everyday society – with wide-reaching consequences in technology, retail, health and the environment, among many other sectors.