Lift off for world-first ultrasound levitation that bends around barriers 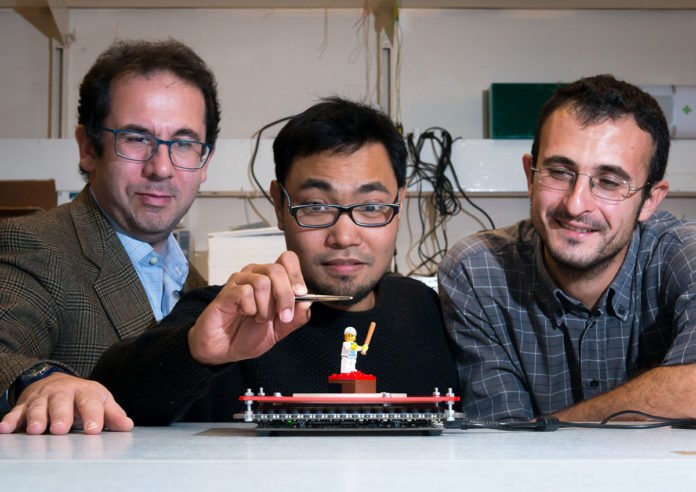 Researchers at the University of Sussex have become the first in the world to develop technology which can bend sound waves around an obstacle and levitate an object above it.

SoundBender, developed by Professor Sriram Subramanian, Dr. Gianluca Memoli and Dr. Diego Martinez Plasencia at the University of Sussex, is an interface capable of producing dynamic self-bending beams that enable both levitation of small objects and tactile feedback around an obstacle.

The technology, to be presented at the 31st ACM User Interface Software and Technology Symposium in Berlin this Monday [October 15], overcomes two key limitations of previous ultrasound levitation set-ups, which were unable to create sound fields of similar complexity and could not bypass obstacles that lay between the transducers and the levitating object.

Dr. Memoli, Lecturer in Novel Interfaces and Interactions at the University of Sussex, said: “This is a significant step forward for ultrasound levitation and overcomes a significant drawback that has been hampering development in this field. We have achieved incredibly dynamic and responsive control so that real-time adjustments are just one step away.”

University of Sussex researchers overcame these challenges by developing a hybrid system that combines the versatility of phased arrays of transducers (PATs) with the precision of acoustic metamaterials while helping to eliminate the restrictions on sound field resolution and variability each of the previous approaches applied.

The technology allows users to experience haptic feedback beyond an obstacle; to levitate around an obstacle and to manipulate non-solid objects such as changing the direction of a candle’s flame.

With SoundBender, the metamaterial provides a low modulator pitch to help create sound fields with high spatial resolution while the PAT adds dynamic amplitude and phase control of the field.

Dr. Martinez-Plasencia, Lecturer in Interactive Graphics at the University of Sussex, said: “We were attracted to this project due to its similarities between optical holography and acoustics. However, the project has been a great trip of discovery, helping us understand how crucial it is to have a high spatial resolution (i.e. the metamaterial), or the techniques required to combine PATs and metamaterials. I am really happy that we can now share all this insight with the rest of the community”

The development opens up new potential in ultrasound levitation, which has a distinct advantage over other levitation techniques because it requires no specific physical properties, such as magnetic or electric, in the object to be levitated and can, therefore, be applied to a far wider range of materials including liquids and food.

The concept of self-bending beams was initially used in engineering applications, to obscure buildings from noise or protect areas from earthquakes, but this is the first time it has been adopted for use in acoustic levitation.

The hybrid system allows for a number of fun applications including new educational experiences with museum displays, enhanced board games with new levels of interactivity, the potential to direct desired smells from a diffuser to where they are needed, the ability to control motion in non-solid items (such as dry ice or fire) and the potential to synchronize these movements to music.

Prof Sriram Subramanian, Professor of Informatics at the University of Sussex and Royal Academy of Engineering (RAEng) Emerging Technologies Chair specializing in developing novel acoustic interfaces, said: “Following our breakthrough, the potential now is for a device that can bend around larger objects, potentially even as the obstacle is moving. We are also pursuing how to make the device broadband so it can work for all frequencies of sound. This would allow, for instance, sending the music of a radio behind a corner or creating zones of silence in the middle of a dance floor.”

How glucose helps the SARS-CoV-2 to replicate?