Understanding how plants use sunlight

Studies of how photoprotection works at the molecular level may provide a pathway to more biomass and crops.

The sun is the main source of energy for almost every living thing on Earth. It gives a plant the light energy it needs to photosynthesize, which converts that light energy into a storable form (glucose) and keeps plants alive.

Sometimes, plants use more energy than they can use and as a result, some crucial proteins can get damaged. To protect themselves, they convert the excess energy into heat and send it back out.

In a new study, MIT scientists wanted to figure out exactly how the photoprotection system in plants works at the molecular level, in the first 250 picoseconds of the photosynthesis process.

Gabriela S. Schlau-Cohen, the Cabot Career Development Assistant Professor of Chemistry said, “If plants didn’t waste so much of the sun’s energy unnecessarily, they could be producing more biomass. Indeed, scientists estimate that algae could grow as much as 30 percent more material for use as biofuel. More importantly, the world could increase crop yields — a change needed to prevent the significant shortfall between agricultural output and demand for food expected by 2050.”

“If we could understand how absorbed energy is converted to heat, we might be able to rewire that process to optimize the overall production of biomass and crops. We could control that switch to make plants less hesitant to shut off the protection. They could still be protected to some extent, and even if a few individuals died, there’d be an increase in the productivity of the remaining population.”

When sunlight strikes a leaf, each photon (particle of light) delivers energy that excites an LHC, first functional unit in photosynthesis. That excitation goes starting with one LHC then onto the next until the point that it comes to a reaction center, where it drives compound responses that split water into oxygen gas, which is released and emphatically charged particles called protons, which remain. The protons actuate the generation of a protein that drives the development of energy-rich sugars expected to fuel the plant’s metabolism.

In bright light, protons may shape more rapidly than the compound can use them, and the aggregating protons signal that overabundance energy is being absorbed and may harm basic parts of the plant’s molecular mechanism.

So, few plants have a unique kind of LHC — called a light-harvesting complex stress related, or LHCSR — whose job is to intervene. In the event that proton development demonstrates that an excess of sunlight is being harvested, the LHCSR flips the switch, and a portion of the energy is scattered as warmth.

But the LHCSR abandons it on — just on the off chance that the sun all of a sudden returns. Accordingly, plants dismiss a considerable measure of vitality that they could be utilizing to fabricate more plant material.

Quenching pigment in LHCSR called a carotenoid- can take two forms: violaxanthin (Vio) and zeaxanthin (Zea). They’ve seen that LHCSR samples are commanded by Vio molecules under low-light conditions and Zea molecules under high-light conditions. Conversion from Vio to Zea would change different electronic properties of the carotenoids, which could clarify the activation of quenching.

Be that as it may, it doesn’t occur rapidly enough to react to a passing cloud. That kind of quick change could be a direct response to the development of protons, which causes a distinction in pH starting with one area of the LHCSR then onto the next.

Studying those photoprotection mechanisms experimentally is quite difficult. Thus, scientists choose another way by focusing on the LHCSR found in green algae and moss. They examined what was different about the way that stress-related proteins rich in Vio and those rich in Zea respond to light — and they did it one protein at a time.

To test the response to light exposure, scientists used a laser to shine picosecond light pulses onto a single LHCSR. They then used a sensitive microscope to detect the fluorescence emitted in response.

To address the first mechanism, they characterized the response of the Vio-rich and Zea-rich LHCSRs to the pulsed laser light using two measures: the intensity of the fluorescence (based on how many photons they detect in one millisecond) and its lifetime (based on the arrival time of the individual photons). 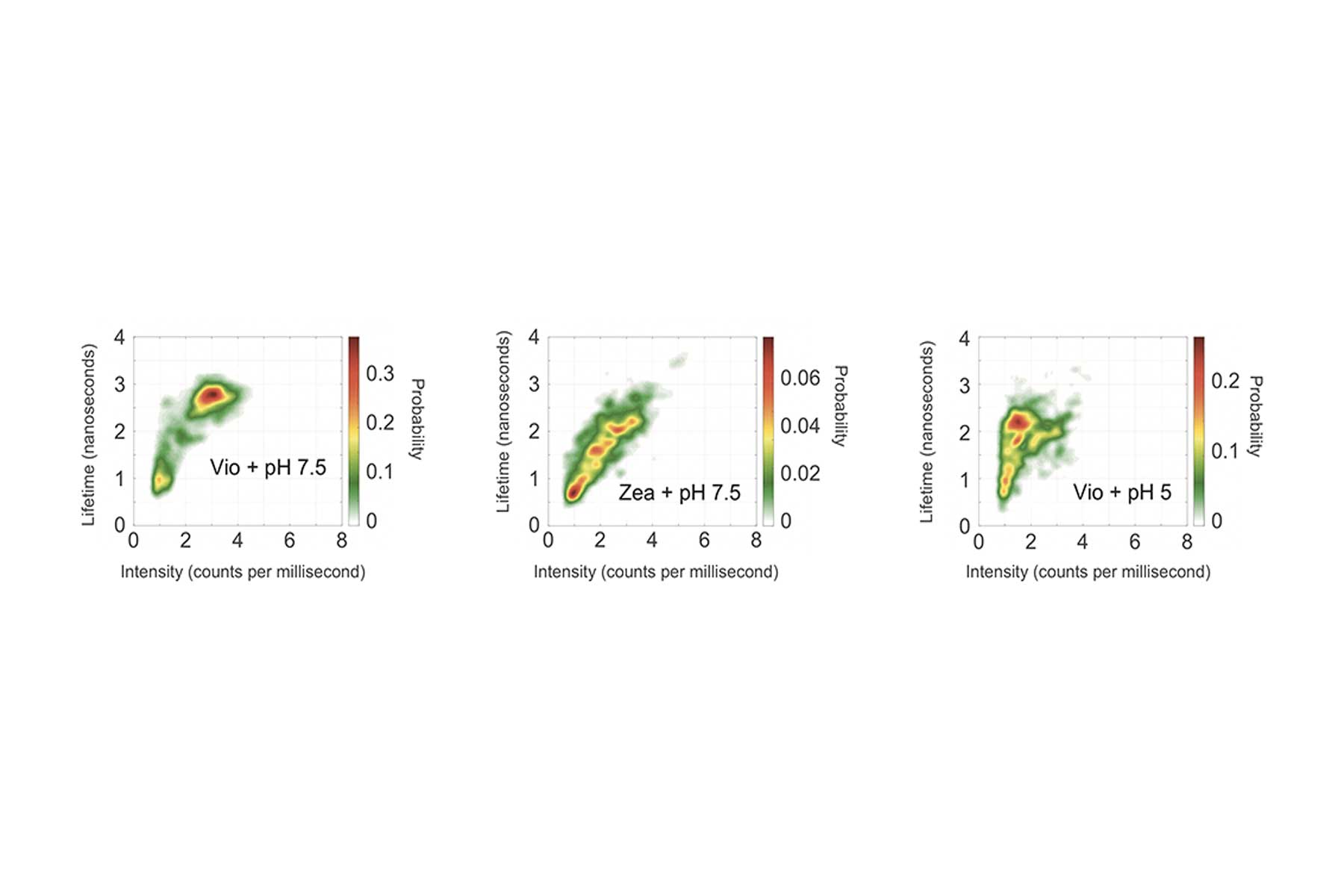 Using the measured intensities and lifetimes of responses from hundreds of individual LHCSR proteins, they generated the probability distributions shown in the figure above. In each case, the red region shows the most likely outcome based on results from all the single-molecule tests. Outcomes in the yellow region are less likely, and those in the green region are least likely.

The left figure shows the likelihood of intensity-lifetime combinations in the Vio samples, representing the behavior of the quench-off response. Moving to the Zea results in the middle figure, the population shifts to a shorter lifetime and also to a much lower-intensity state — an outcome consistent with Zea being the quench-on state.

To explore the impact of proton concentration, the researchers changed the pH of their system. The results just described came from individual proteins suspended in a solution with a pH of 7.5. In parallel tests, the researchers suspended the proteins in an acidic solution of pH 5, thus in the presence of abundant protons, replicating conditions that would prevail under bright sunlight.

The intensity-lifetime results for Vio and Zea in the two pH environments are consistent when they’re taken at time intervals spanning seconds or even minutes in a given sample.

Research on the heat-dissipation mechanism was supported by the Center for Excitonics, an Energy Frontier Research Center funded by the US Department of Energy; a CIFAR Azrieli Global Scholar Award; and the European Economic Community projects AccliPhot and SE2B. Research on energy transfer was supported by the US Department of Energy, Office of Science, Office of Basic Energy, and by the Singapore-MIT Alliance for Research and Technology. Further information can be found in: