Third of Himalayan glaciers can no longer be saved, study

Global warming is on track to transform the frigid, glacier-covered mountain peaks. 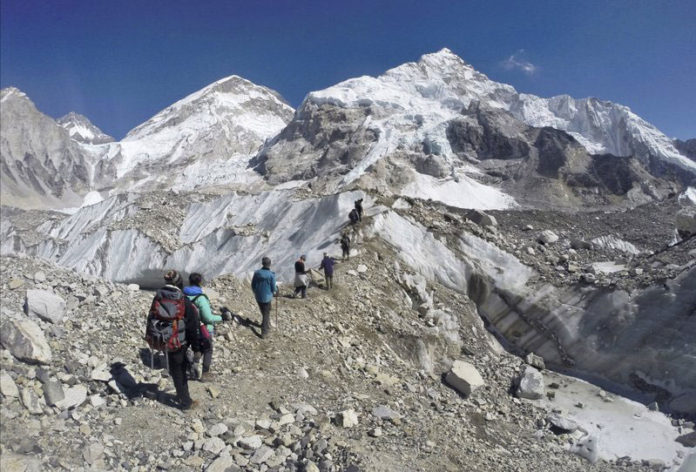 According to a new study, even if making efforts for limiting global warming, one of the Himalayan glaciers will melt by the end of the century due to climate change. The result will also threaten water sources for 1.9 billion people.

Even the most ambitious goal set by Paris agreement to limit global warming would lead to a 2.1 spike in temperature in the HKH region leading to the melting of glaciers.

If global efforts to curb climate change fail, the impact could be far worse: a loss of two-thirds of the region’s glaciers by 2100, said the Hindu Kush Himalaya Assessment released Monday by the International Centre for Integrated Mountain Development.

Philippus Wester of the center said, “Global warming is on track to transform the frigid, glacier-covered mountain peaks of the Hindu Kush Himalayas cutting across eight countries to bare rocks in a little less than a century.”

“This impact could range from flooding from the increased runoff to increased air pollution from black carbon and dust deposited on the glaciers.”

The study looked observed the impacts of climate change on the regions including Asia through Afghanistan, Pakistan, India, Nepal, China, Bhutan, Bangladesh, and Myanmar. All these regions have world’s tallest mountain peaks and glaciers that feed into the river.

Saleemul Huq, director of the International Center for Climate Change and Development, an environmental research center in Dhaka said, “All the countries affected need to prioritize tackling this upcoming problem before it reaches crisis proportions.”

The 2015 Paris Agreement was a landmark moment in international diplomacy, bringing together governments with vastly different views to tackle global warming. It set a headline target of keeping average global temperatures from rising by more than 2 C, or 1.5 C if possible.

According to a recent report by the Intergovernmental Panel on Climate Change, emissions of the most abundant greenhouse gas, carbon dioxide, would need to be reduced to a level the planet can absorb — known as net zero — by 2050 to keep global warming at 1.5 C as envisaged in the agreement.

Over 350 researchers, practitioners, experts, and policy-makers were involved in drafting the HKH Assessment Report which is styled after the IPCC reports.

Wester said, “This is the climate crisis you haven’t heard of. Global warming is on track to transform the frigid, glacier-covered mountain peaks of HKH cutting across eight countries to bare rocks in a little less than a century…”

Further, the report warns that extremes in precipitation are increasing in the HKH region. “The number of intense precipitation days and intensity of extreme precipitation have increased overall in the last five decades. If these trends persist the frequency and magnitude of water-induced hazards in the region will increase in the future,” it states. It, however, points out that consensus among climate models for the region is “weak” which is a result of the area’s complex topography and the coarse resolution of global climate models.

First of its kind study reveals evidence that early exposure to dirty air alters genes in a way that could lead to adult heart disease, among other ailments.
Read more
Environment

Global greenhouse gas emissions over the last century have made southern China a hotspot for bat-borne coronaviruses, by driving the growth of forest habitat favored by bats.
Read more
Environment