Study resolves the mystery of an enigmatic Triassic reptile

A brand-new kind of beast. 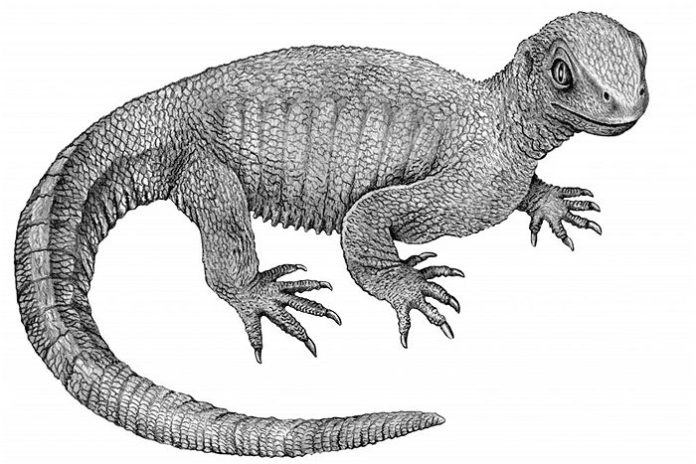 The fossilised remains of a Triassic reptile, currently housed in two separate collections on each side of the Atlantic. The remains of the reptile, which lived 200 million-years-ago were discovered some decades ago in a South Gloucestershire quarry. This species, closely related to the living Tuatara from New Zealand, was originally described as Clevosaurus latidens in 1993 by the British paleontologist Nicholas Fraser, referring it to the genus Clevosaurus.

Scientists from the University of Bristol have re-examined the fossilized remains of a Triassic reptile and have discovered it is a brand-new kind of beast.

Lead author Jorge Herrera-Flores from the University of Bristol’s School of Earth Sciences, said: “The restudy of the fossils confirmed our previous suspicions that this species was not related to the carnivorous Clevosaurus.

“It clearly represents a new genus of herbivorous rhynchocephalian, and we are pleased to call it Fraserosphenodon, in honour of Nick Fraser, who first found it, and is now Head of Natural Sciences at the National Museum of Scotland in Edinburgh.”

Co-author, Dr Tom Stubbs, added: “We confirmed the uniqueness of the species by carrying out various numerical analyses of relationships. This showed that Fraserosphenodon is a much more advanced rhynchocephalian than Clevosaurus.”

Co-author Armin Elsler said: “These Triassic fossils are of huge interest. They are close relatives of the living Tuatara, a kind of living fossil, found today only on some islands around New Zealand. We need to understand more about the evolution of this rare and endangered species.”

Professor Mike Benton, Jorge’s PhD supervisor, added: “I’m delighted we could name this after Nick Fraser, my old classmate at the University of Aberdeen.

“Nick has done great work on Triassic fossil reptiles, including the rhynchocephalians, from his time in Aberdeen, but also as curator at the Virginia Museum of Natural History, and now in Edinburgh.”

The study is published online in the Journal of Palaeontology.