Physicists at EPFL used Scanning Tunneling Microscopy to successfully test the stability of a magnet made up of a single atom.

Regardless of the ascent of solid-state drives, magnetic storage devices, for example, regular hard drives and attractive tapes are still exceptionally normal. In any case, as our information stockpiling needs are expanding at a rate of right around 15 million gigabytes for each day, researchers are turning to alternative storage devices.

One of these is single-atom magnets: stockpiling gadgets comprising of individual atoms stuck (“adsorbed”) on a surface, every molecule ready to store a single bit of data that can be composed and perused utilizing quantum mechanics. Furthermore, in light of the fact that atoms are tiny enough to be packed together thickly, single-atom storage devices guarantee huge data limits.

Be that as it may, in spite of the fact that they are never again sci-fi, single-atom magnets are still in essential research, with numerous central obstructions to be defeated before they can be actualized into business gadgets.

By using scanning Tunneling Microscopy, scientists at the EPFL demonstrated that the stability of a magnet consisting of a single atom of holmium, an element they have been working with for years.

The main goal of the study is to overcoming the issue of magnetic remanence, and showing that single-atom magnets can be used to read and write data.

Scientists were able to see atoms on surfaces. They discovered that the holmium atoms could hold their magnetization in a magnetic field exceeding 8 Tesla, which is around the quality of magnets utilized as a part of the Large Hadron Collider. The creators depict this as “record-breaking coercivity”, a term that portrays the capacity of a magnet to withstand an external magnetic field without getting to be demagnetized. 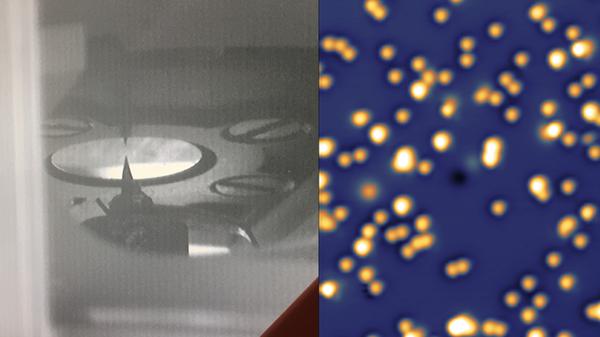 EPFL’s Fabian Natterer who is the paper’s first author said, “Single-atom magnets offer an interesting perspective because quantum mechanics may offer shortcuts across their stability barriers that we could exploit in the future. This would be the last piece of the puzzle to atomic data recording.”

Next, they turned up the heat: The researchers exposed a series of Holmium single-atom magnets to temperatures of up to 45 Kelvin, (-233.15 degrees Celsius), which, for single atoms, is like being in a sauna.

Natterer said, “Research in the miniaturization of magnetic bits has focused heavily on magnetic bistability. We have demonstrated that the smallest bits can indeed be extremely stable, but next, we need to learn how to write information to those bits more effectively to overcome the magnetic ‘trilemma’ of magnetic recording: stability, writability, and signal-to-noise ratio.”