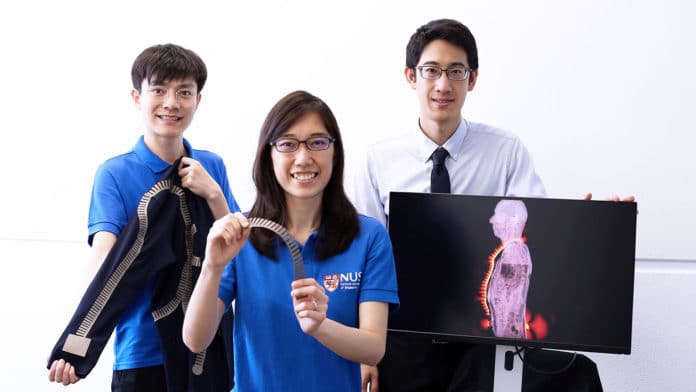 Over the past decade, a major trend in electronics has been the development of sensors, displays and smart devices which are seamlessly integrated into the human body. Most of these wearable devices are singularly connected to a user’s smartphone and transmit all data via Bluetooth or Wi-Fi signals. But as consumers wear increasing numbers of wearable devices, and as the data, they transmit increases in sophistication, more innovative connection methods are being sought after.

Now, researchers from the National University of Singapore (NUS) have invented a completely new way for wearable devices to interconnect. They incorporated conductive textiles into clothing to dynamically connect several wearable devices at once. This ‘wireless body sensor network’ allows devices to transmit data with 1,000 times stronger signal than conventional technologies, meaning the battery life of all devices is dramatically improved. Wireless networks of these wearable devices on a body have future applications in health monitoring, medical interventions, and human-machine interfaces.

This technological breakthrough, which took the 10-member team a year to achieve, was published as the cover of Nature Electronics on 17 June 2019.

Currently, almost all body sensors like smartwatches connect to smartphones and other wearable electronics via radio-waves like Bluetooth and Wi-Fi. These waves radiate outwards in all directions, meaning that most of the energy is lost to the surrounding area. This method of connectivity drastically reduces the efficiency of wearable technology as most of its battery life is consumed in attempting the connection.

As such, Assistant Professor John Ho and his team from the Institute for Health Innovation & Technology (NUS iHealthtech) and the NUS Faculty of Engineering wanted to confine the signals between the sensors closer to the body to improve efficiency.

Their solution was to enhance regular clothing with conductive textiles known as metamaterials. Rather than sending waves into surrounding space, these metamaterials are able to create ‘surface waves’ which can glide wirelessly around the body on the clothes. This means that the energy of the signal between devices is held close to the body rather than spread in all directions. Hence, wearable electronics use much less power than normal, and the devices can detect much weaker signals.

“This innovation allows for the perfect transmission of data between devices at power levels that are 1,000 times reduced. Or, alternatively, these metamaterial textiles could boost the received signal by 1,000 times which could give you dramatically higher data rates for the same power,” Asst Prof Ho stated. In fact, the signal between devices is so strong that it is possible to wirelessly transmit power from a smartphone to the device itself — opening the door for battery-free wearable devices.

Crucially, this signal boost does not require any changes to either the smartphone or the Bluetooth device — the metamaterial works with any existing wireless device in the designed frequency band.

This inventive way of networking devices also provides more privacy than conventional methods. Currently, radio-waves transmit signals several meters outwards from the person wearing the device, meaning that personal and sensitive information could be vulnerable to potential eavesdroppers. By confining the wireless communication signal to within 10 centimeters of the body, Asst Prof Ho and his team have created a network which is more secure.

The team has a first-year provisional patent on the metamaterial textile design, which consists of a comb-shaped strip of metamaterial on top of the clothing with an unpatterned conductor layer underneath. These strips can then be arranged on clothing in any pattern necessary to connect all areas of the body. The metamaterial itself is cost-effective, in the range of a few dollars per meter, and can be bought readily in rolls.

“We started with a specific metamaterial that was both flat and could support surface waves. We had to redesign the structure so that it could work at the frequencies used for Bluetooth and Wi-Fi, perform well even when close to the human body, and could be mass-produced by cutting sheets of conductive textile,” Asst Prof Ho explained.

The team’s particular design was created with the aid of a computer model to ensure successful communication in the radio frequency range and to optimize overall efficacy. The smart clothing is then fabricated by laser-cutting the conductive metamaterial and attaching the strips with fabric adhesive.

Once made, the ‘smart’ clothes are highly robust. They can be folded and bent with minimal loss to the signal strength, and the conductive strips can even be cut or torn, without inhibiting the wireless capabilities. The garments can also be washed, dried, and ironed just like normal clothing.

The team is talking to potential partners to commercialize this technology, and in the near future, Asst Prof Ho is hoping to test the ‘smart’ textiles as specialized athletic clothing and for hospital patients to monitor performances and health. Potential applications could range dramatically — from measuring a patient’s vital signs without inhibiting their freedom of motion, to adjusting the volume in an athlete’s wireless headphones with a single hand motion.

“We envision that endowing athletic wear, medical clothing and other apparel with such advanced electromagnetic capabilities can enhance our ability to perceive and interact with the world around us,” Asst Prof Ho said.

A new type of intelligent material