Predicting the properties of disordered polymers

The results could, among other things, pave the way to develop new materials from synthetic polymers. 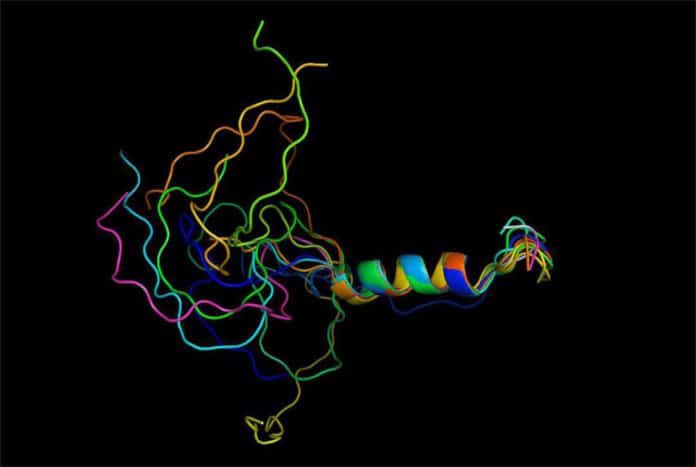 In a new study, scientists used a combination of theory, experiment, and simulation to read patterns on long chains of molecules to understand and predict the behavior of disordered strands of proteins and polymers. The work offers detailed insights on the physics behind the precise sequence of charged monomers along the chain and how it affects the polymer’s ability to create self-assembling liquid materials called complex coacervates.

Sing said, “The thing that I think is exciting about this work is that we’re taking inspiration from a biological system. The typical picture of a protein shows that it folds into a very precise structure. This system, however, is based around intrinsically disordered proteins.”

“Our earlier paper showed that these sequences matter, this one shows why they matter. The first showed that different sequences give different properties in complex coacervation. What we’re able to now do is use a theory to actually predict why they behave this way.”

“Even unstructured proteins have a precision associated with them. Monomers, the building blocks of complex molecules, are the links to the chain. What we found is that by knowing the sequence of polymers and monomers and the charge (positive, negative or neutral) associated with them, one can predict the physical properties of the complex molecules.”

The study shows that you can actually change its strength by changing its sequence. Changing the sequence even by single monomer can change the formation of these things. What’s more, predicting the outcome would be easy.

Sing said, “This information is valuable to biophysicists, bioengineers and material scientists alike. This discovery will help engineers understand a broad class of proteins and tune proteins to modify their behavior. It gives them a new way to put information into molecules for building new materials and make a better guess as to how these properties behave.”

The study is published in the journal ACS (American Chemical Society) Central Science.

A solution with a first-of-its-kind coating.
Read more
Invention

A 1-atom-deep look at a water-splitting catalyst.
Read more
Invention