One of World’s Brightest LED Flashlight 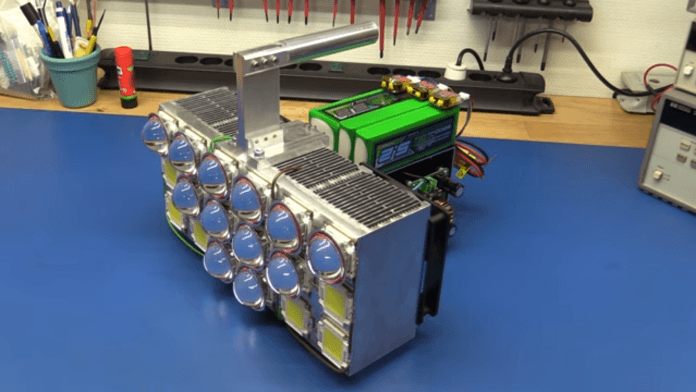 Nowadays, powerful white-light-emitting diodes (LED) are increasingly replacing incandescent bulbs in the practical flashlight. They are more efficient than incandescent lamps and produces the order of 100 lumens for every watt. It can light up EVERYTHING in your field of vision.

A new type of world’s brightest flashlight is invented that emits 108,000 lumens. The lights18x 100W Cool White LEDs, which are wired up 2 and 2 in series. This cuts the current draw in half compared to wiring them all up in parallel. The current is STILL a whopping 27 Amps, so it has been split up between 4 power supplies. Thus, it allows using thinner wires. These LED lights produce seven times more light than halogen bulbs by giving an equivalence of 8.4 kW Halogen.

The converters (Power supplies) are switch mode boost converters. They take an input voltage of 10-60V and optimise above the 64V needed for the LEDs.

The flashlight is powered by 12 cells of Lipo batteries at 5.2 Ah each. Current start varying when the battery voltage rises at 50.4V and drops all the way down to 40V. The batteries are rated for a continuous output of 52A, which is not excited. The light drains whole battery in 10 minutes at full power. Draining such amount of power produces a lot of heat. And after 6 minutes, the flashlight becomes too hot to handle against its two computer fans within the body.

This flashlight does not have necessarily practical popularity. It has some drawbacks too. For example, such powerful lights into someone’s eyes could temporarily blind them and hold on to such heat could cause burning chances.