Are you fascinated by space? Do you want to explore? A new Virtual envoirnment will let you do that.

Scientists at EPFL have developed a virtual environment that allows you to enter the most comprehensive virtual universe. Using the latest astrophysical and cosmological data, they have developed an open-source software called VIRUP, Virtual Reality Universe Project.

In this virtual envoirnment, one can navigate through the most detailed map of the universe from the comfort of your own home. It is exactly like what an astronaut would see during a spacewalk.

Astrophysicist Yves Revaz of LASTRO initially thought of representing the vast data like a movie. Later he wondered, “what about creating a visual representation of the data in real-time, as if you were there, an observer at an arbitrary point in space and time?”

He thus decided to do so with VIRUP. With the help of LASTRO software engineer Florian Cabot, they rendered terabytes of data at 90 frames per second. The virtual reality environment imposes the latter constraint for a fully immersive and smooth experience.

Revaz said, “VIRUP is precisely a way of making all of our astrophysical data accessible to everyone, and this will become even more important as we build bigger telescopes like the Square Kilometer Array that will generate tremendous amounts of data.”

With the release of VIRUP comes a short movie entitled “Archaeology of Light.”

You can watch the movie in 2D, 360°, and in stereo 180° on YouTube. If you have access to a VR environment, you can immerse yourself in “Archaeology of Light.”

VIRUP has already visualized data from over eight databases bundled together. It also renders data sets of contemporary and scientifically robust simulations based on research.

In this virtual universe, the International Space Station (ISS) is just an arm’s length away. Turning around, you will see the moon, a tiny circle far off in the distance.

What’s more, you can also watch the Milky Way Galaxy and its future collision with the Andromeda galaxy. You can also see vast portions of the cosmic web.

There’s also the Open Exoplanet Catalog which aggregates various sources of exoplanet data. You can visit the 4500 discovered exoplanets so far, for instance, but the way they look are artist impressions inferred from observation.

You can also navigate through the 50 million galaxies measured so far by the Sloan Digital Sky Survey. Still, the actual data has limited resolution, limiting how much detail can be shown in its virtual representation.

Cabot reported, “We considered using existing graphics engines for visualizing the data, but in the end, I developed one specifically for the project. It’s flexible, we can add more data as it becomes available and tailored to astronomy. For this first release of VIRUP, I have focused on rendering static data, so interacting with the data is still a bit rough, and the rendering of simulations can’t yet happen in real-time, for example.”

“There is still a tremendous amount of data that can be explored with the help of VIRUP. Some of the next steps could be to include databases of objects in our solar system like all of the asteroids, or various other objects in the galaxy like nebulae and pulsars.”

VIRUP is also capable of building a virtual universe in other VR environments, like a dome which is especially useful for venues like planetariums, panoramas, caves, and half-caves. 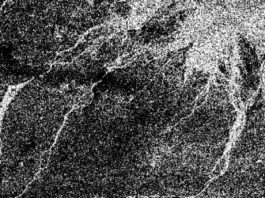 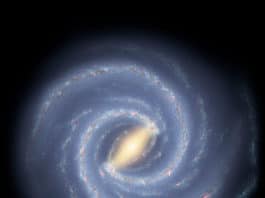 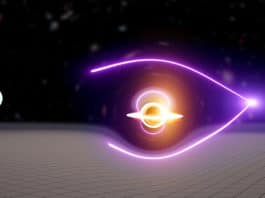