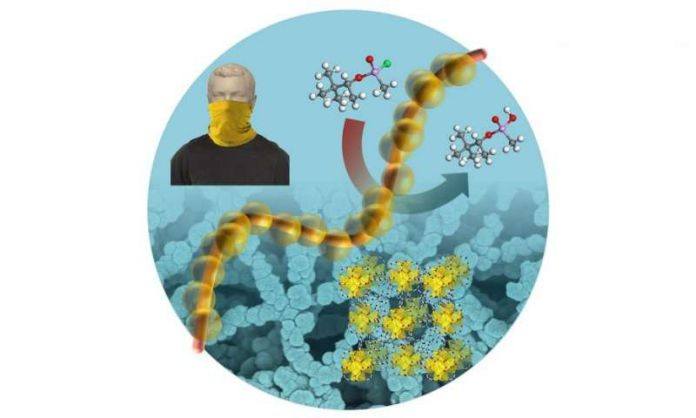 Scientists from the North Carolina State University have created a new fabric material. It consists nanoscale fibers that are capable of degrading chemical warfare agents (CWAs). This novel fabric material can detoxify these CWA compounds. Generally, the technology that address CWA is depends on carbon-based materials. This carbon base material only absorbs hazardous compounds. Thus, they can’t degrade them.

According to previous research, MOF’s found to be effective on degradation. It comes in the form of powder.

Junjie Zhao, a former PhD student said, “We wanted to see if we could grow MOFs (Metal-Organic Frameworks) as functional coatings onto fibers so that they could be used in masks, filters and protective garments.”

Although the uniform coating of MOF’s is synthesised on the top of the nanofibers. Thus, it forms a unique Kebab like structures. These MOFs are what break down the CWAs, rendering them harmless.

Parsons, Alcoa Professor said, “We think that this demonstration of MOF thin films retains their chemical functionality. It is an important step for personal security and has implications for many other civilian and commercial uses.”

The discovery of this fabric material:

Scientists primarily deposit a thin film of titanium oxide onto a fabric made of nanoscale fibers. They used atomic layer deposition i.e., a vapour phase technology. The titanium oxide represents a nucleation layer. It enables the researchers to apply various zirconium-based MOFs onto the nanofibers in an evenly distributed way.

Christopher Oldham, a senior research scholar said, “This is a big step forward for materials designed for CWA protection. The next steps include integration of the MOF-nanofiber kebab structures into the currently fielded garment and suit materials, and evaluating the durability of the materials in various conditions. Currently, field chemical suits are heavy and require a lot of energy for the soldier to wear. If we can integrate the MOF-consisting nanofibers into outer layers of the chemical suit, inner layers of the suit will remove. Ultimately this translate to a suit potentially behaves and feels like a piece of athletic wear than a garbage bag.”

A new spin on metal-organic frameworks