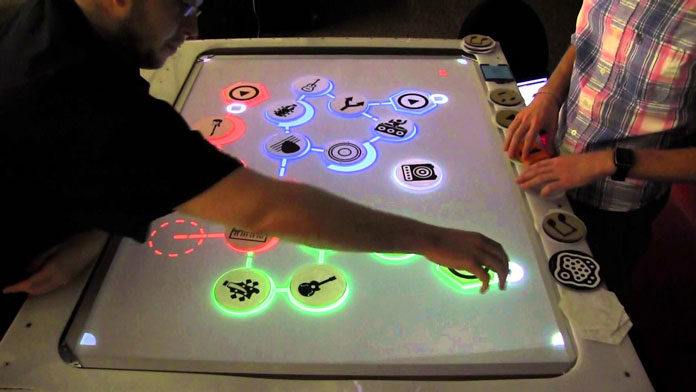 The table consists of basic computing programming elements. So whenever user going to learn programming basics, he/ she will use these elements. For example, iteration and go-to statements.

Scientists actually wanted to increase the literacy of programming in students.

Project lead Brian Magerko said, “It’s also about changing the attitude about computation and exposing it to people that might not have sought it out otherwise. Hopefully, some of them will think it is a cool, new way to express themselves.”

There is coaster like markers present on the interactive surface of TuneTable. The marker is also called as fiducials on the coasters. Each marker is assigned a sound or a command. The surface uses computer vision to detect each marker’s function. So, whenever the user wants to create music, they only need to move markers.

Magerko said they’re also very appealing to underserved populations, such as women, African-Americans, and Latinos. He and Georgia Tech College of Design Professor Jason Freeman learned that after designing a software program called EarSketch that teaches Python and Javascript at nearly 200 high schools across the country.

EarSketch students use digital audio workstations and the programming languages to manipulate loops and compose music. TuneTable reimagines this experience within a museum exhibit.

Using EarSketch, people can continue tinkering with the code when they get home.

Freeman said, “The table allows us to bring the basics of computer programming out of the classroom and into more informal settings such as museums. Kids can be playful and social, just by walking up and giving it a try.” (Freeman is a co-principal investigator on the NSF grant.)

A novel technology, capable of maximizing the performance of the existing CQD solar cells has been developed, recently.
Read more
Invention

A smart jumpsuit that accurately measures the infants’ movement and development

A new innovation makes it possible, for the first time, to quantitatively assess children's spontaneous movement in the natural environment.
Read more
Invention

Noise in a sensor? No problem!
Read more
Invention

Bubbly buildup can hinder many industrial processes, but a new method can reduce or even eliminate it.
Read more
Invention