GPS data serves as a basis for the geodetic model of the Alps. 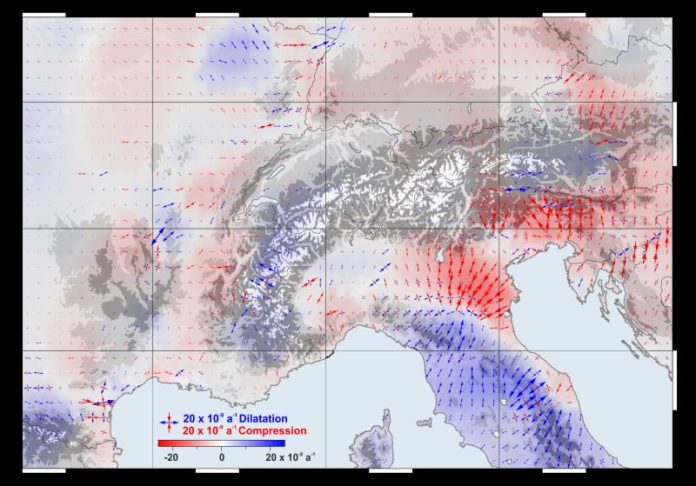 Humans can’t specifically see the elements at work in the earth’s crust. Anybody standing on a mountains’ top in the Alps doesn’t see that the mountain beneath is moving.

Scientists at the TUM German Geodetic Research Institute have now developed a model that makes the movements of the mountain range visible on a comprehensive basis for the first time. for this, scientists gathered the data from more than 300 GPS antennas in the German, Austrian, Slovenian, Italian, French and Swiss Alps.

They then identified the positions of the measurement stations, accurate down to fractions of a millimeter; a large number of the stations were set up in the EU project ALPS-GPSQUAKENET and are in part operated by TUM itself.

The model portrays obviously both vast scale examples of development and local exceptional variables: Thus, for instance, every year the Alps grow a normal of 1.8 millimeters in stature and move toward the upper east at a speed of up to 1.3 millimeters. In South and East Tyrol, anyway a turn towards the east is superimposed on this development, while in the meantime the mountain go is being packed.

Also, the ascent in tallness isn’t indistinguishable wherever either: Very small in the southern piece of the western Alps, it achieves its greatest with a speed of in excess of 2 millimeters for every year in the focal Alps, at the limits of Austria, Switzerland, and Italy.

These changes in the surface of the earth serve as the basis for inferences regarding underground plate tectonics. The movements measured are the result of the Alpine orogeny, which began in the Jurassic period 200 million years ago and is still going on today.

Prof. Florian Seitz of the Chair of Geodetic Geodynamics said, “The data are a goldmine for geodesy, with its objective of accurately measuring the surface of the earth and identifying any changes occurring.”

“The greatest challenge was the homogeneous processing of the measurements. The measurements are for example impaired by the weight of snow which lowers the antennas in the winter, and by anomalies in the atmosphere which affect the GPS signals. These interference factors have to be detected and corrected.”

“Previous analyses were limited to individual regions. Our model reaches from the Maritime Alps all the way to Vienna and thus incorporates all parts of the mountain range,” Seitz points out. “Furthermore, at a resolution of 25 kilometers, we can represent horizontal and vertical shifts as well as lateral spreading and compression.”

The study has been published in the journal Earth System Science Data.

All the data calculated in the course of the study are available here.