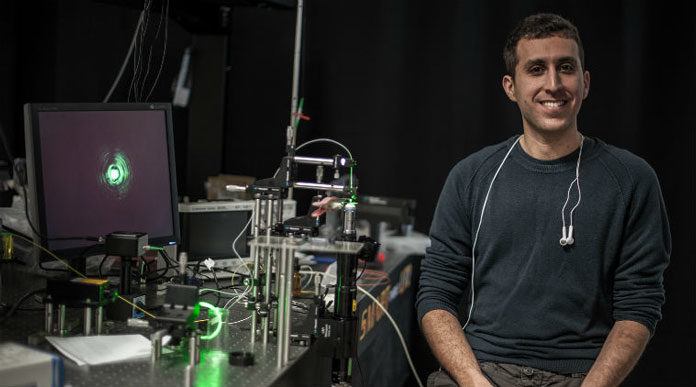 The scientists from the Technion-Israel Institute of Technology, Israel have developed the first ‘water wave laser’. This water wave laser emits through the interaction of water waves and light. Researchers think that the laser could someday be used in tiny sensors that combine light waves, sound and water waves. Through this laser, scientists show that the water wave oscillations within a liquid device can also generate laser radiation.

This water wave laser came out from the two unrelated areas i.e., nonlinear optics and water waves. For now, the laser offering a new scaffold for scientists analyzing the interaction of light and fluid at a scale smaller than the width of a human hair.

If talking about conventional laser, laser beams produce when the electrons in atoms get agitate by energy gain from an outside source. The excitation causes the electrons to emit radiation in the form of laser light.

Research led professor Tal Carmon said, “The possibility of creating a laser through the interaction of light with water waves has not been examined. It because of the huge difference between the low frequency of water waves on the surface of a liquid and the high frequency of light wave oscillations.”

The dissimilarity in frequencies decreases the effectiveness of the energy transfer between light and water waves. The energy is indeed essential for creating emission of the laser. To fix this reduced efficiency, scientists created a device. Inside the device, an optical fiber delivers light into a tiny droplet of octane and water.

Inside the droplet, the light waves and water waves passed through each other many times. This interaction generates the energy that leaves the droplet as the emission of the water-wave laser.

Researchers said, “The interaction between the fiber optic light and the minuscule vibrations on the surface of the droplet are like an echo.”

Scientists said, “The minute pressure applied by light can cause droplet deformation. This deformation is a million times greater than in a typical optomechanical device. Thus, it may offer greater control of the laser’s emissions and capabilities.”

MIT neuroscientists developed a computer model that can localize sounds