Testing the accuracy of different versions of the quantum gravity theory. 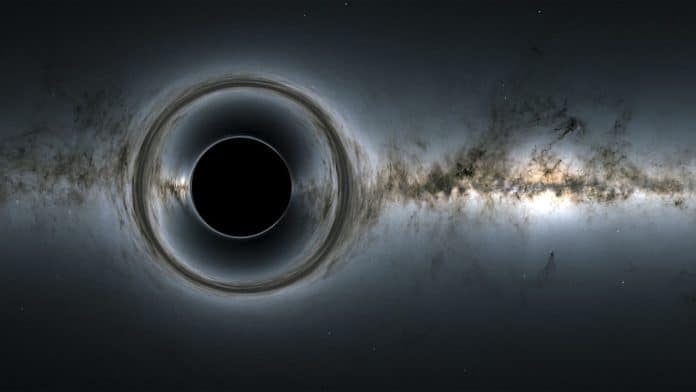 Hawking radiation is the thermal radiation anticipated to be precipitously emitted by black holes. It emerges from the steady conversion of quantum vacuum fluctuations into pairs of particles, one of which escaping at infinity while the other is trapped inside the black hole horizon.

Einstein’s gravitation theory relates to the recent revelation of gravitation waves, it still leaves some questions, including the nature of the singularity, dark matter, dark energy, and the question of quantum gravity.

Also, observations of gravity waves do not exclude that alternative gravitation theories may be accurate, and they can be used to describe black holes. Such theories, which include additional quantum components, don’t contradict the observed image of black hole mergers.

Calculations made following these theories predict the same behavior of black holes at a great distance from each other, but at the same time, demonstrate important features near the event horizon—the “border” of the black hole from beyond which there is no return.

There is a common belief that it is impossible to beyond the event horizon of a black hole because nothing can escape, including particles and radiation. However, Stephen Hawking proved that black holes could “evaporate” by emitting various elementary particles.

It means all the information absorbed by the black hole can disappear. This is opposite to basic ideas -it is accepted that information can’t disappear without any trace. In this manner, alternative gravitation hypotheses, planned for disposing of this paradox, have gotten progressively well known since they could support a quantum gravitation theory.

Another promising approach- Einstein–Gauss-Bonnet gravity- applies quantum components as a correction to the Theory of General Relativity. In addition to the Einstein part, it contains quadratic curvature terms and a scalar field.

For detailed comprehension of how a black hole responds to external gravitational perturbations, scientists often use the concept of Quasinormal modes (QNM), the modes of energy dissipation of a perturbed object or field. In other words, the modes describe perturbations of an area that decay in time. These modes are also quasinormal because they fade over time, and their amplitude can be measured only for a small period.

In a new study, RUDN University physicist in collaboration with Czech Republic scientists Antonina Zinhailo and Zdeněk Stuchlík studied classical (quasinormal) and quantum (Hawking’s) radiation of test fields on the background of a four-dimensional, spherically symmetric and asymptotically flat black hole in the Einstein-dilaton-Gauss-Bonnet theory with dilaton. They come up with a formula for calculating Hawking radiation on the event horizon of a black hole, which allows physicists to determine how this radiation would be changed with quantum corrections to Einstein’s theory of gravity.

The formula is for the eikonal state of quasinormal modes. It can be used to calculate the quasinormal modes of the test scalar and Maxwell’s fields and estimated the Hawking radiation intensity for the Einstein-dilaton-Gauss-Bonnet black hole.

Scientists believe that “This formula will allow researchers to test the accuracy of different versions of the quantum gravity theory by observing black holes, and comprises a step toward the long-sought “grand unification theory” that would connect quantum mechanics and relativity.”

Text fields are all fields in the vicinity of a black hole because they propagate on its background (for example, a Dirac field or an electromagnetic field). The intensity of the Hawking electromagnetic radiation and the Dirac field proved to be a significantly more sensitive characteristic than its quasinormal spectrum, showing an increase in the rate of energy emission by 57 percent and 48 percent, respectively to the fields.

Roman Konoplya said, “We obtained an estimate of the intensity of the Hawking evaporation of black holes by taking into account quantum corrections to the geometry of the black hole.”

“Classical radiation (e.g., electromagnetic or other waves) differ from Einstein’s only a few percents, that is, Hawking radiation is a much more sensitive mechanism. Quasinormal modes are the frequencies of classical radiation, which, unlike quantum modes, differ little from the Einstein case. In the future, perhaps by observing the first black holes that appeared in the early universe, this may clarify our ideas about quantum corrections to gravity.”

The article is published in the journal Physical Review D.