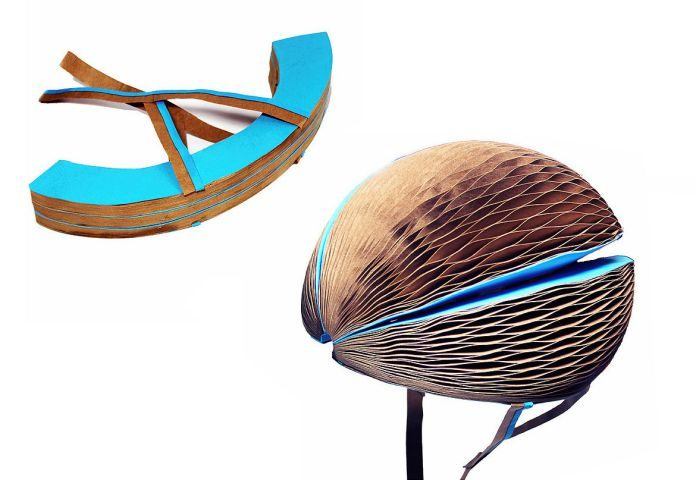 A bike helmet is a protective gear which protects us from injuries. But, most of the bike riders don’t carry helmets with them. They ride helmet-free, which is risky.

Isis Shiffer has designed an affordable, collapsible, biodegradable folding bike helmet available from a curbside vending machine. It is also known as EcoHelmet. This EcoHelmet is made up of cardboard. It can fold up accordion-style to about the size of a banana. EcoHelmet is compact enough to fit in a laptop bag. There is a honeycomb-patterned paper that cushions the wearer’s head and absorbs and distributes impacts by protecting a rider from injury.

According to a statement on the James Dyson Award’s EcoHelmet project website, “This might be sold for as little as $5.”

Shiffer, a designer, and self-described ardent cyclist said, “Riding without the helmet could be a scary experience. So, I decided to create an affordable helmet that riders could pick up on the go.”

“Traditional helmets are so bulky that a vending machine couldn’t hold enough to keep up with daily demand. EcoHelmet could be collapse to take up a minimal amount of space. But that would still provide the same protection as its bulkier cousin.”

Paper honeycomb is lightweight and recyclable. It even absorbs impacts so that it could use to supply packaging for chopper drops in a crisis zone. The next step was to turn the material into something that people would actually want to wear on their heads.

Shiffer was partial to an early design that stimulates a pineapple. But user reactions convinced her that a less whimsical helmet would likely appeal to a wider audience.

Shiffer said, “It doesn’t matter how functional it is. If you look like an idiot when you put it on your head, no one’s going to wear it.”

This foldable bike helmet will be ‘one size fits most’. It is design to use several times and then recycle.

Shiffer is now designing the helmet for U.S. Consumer Product Safety Commission certification. She has a goal of making the helmets available in vending machines at bike-share stations.