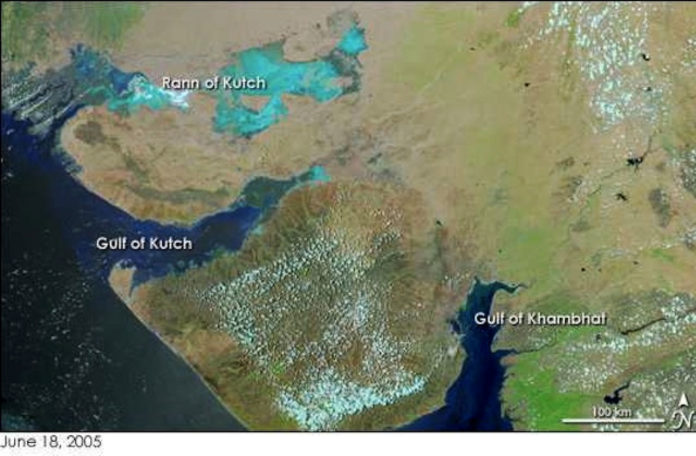 Researchers have found the presence of thick sediment layers dating back to a pre-continental era in the Cambay and Kutch basins of Gujarat.

Using electromagnetic geophysical methods, scientists from Allahabad center of the Indian Institute of Geomagnetism found the presence of pre and post-continental sediment layers in the region.

Researchers measured the earth’s natural electric and magnetic variations and observed two high conductive and one high resistive layer. The high resistive layer shows volcanic eruptions known as Deccan Traps, is about 0.5 to 1.5 kilometer thick. The top conductive layer is about 2 to 6 kilometers thick Cenozoic sediment, while the bottom layer is the pre-continental Mesozoic sediment. This layer varies from site to site.

Scientist carried out the magnetotelluric surveys along four east-west corridors in the two basins passing through major geographical locations at Sanchore, Tharad, Diyodar, Patan and Mehsana. The earth’s electric and magnetic field variations were measured at 68 points to understand the basement configuration and sediment thickness.

The thickness of pre-continental sediment could not be measured but these are very thick at Mehsana site and thin at other sites, researchers said. The basement of Cambay and Kutch basins is approximately 5 to 7.7 kilometers deep.

“The deep high conductive zone observed near Mehsana supports the evidence of thick pre-continental sediments as suggested by deep seismic and other studies. Thick Cenozoic and Mesozoic sediments play a role in tectonics and generation of intraplate earthquakes in these basins,” explained Dr. C K Rao, leader of the research team, while speaking to India Science Wire.

The Mesozoic and Cenozoic sediments are records of the evolutionary history of continents. The present continents evolved from one supercontinent Pangea during the Mesozoic era. It broke up into two parts – Gondwana and Eurasia. These two parts further broke up into continents and started drifting. The Cambay and Kutch rift basins record the earth’s evolutionary history as they evolved in the Mesozoic time, underwent changes with basaltic lava eruptions and Indo-Eurasian continental plate collision which formed the Himalaya.

The detailed study of pre-continental sediments will be helpful in better understanding of tectonics, earthquakes, evolution and drifting process of the continents. The Cambay rift basin is also one of the major hydrocarbon producing rift basins in India. The hydrocarbons from this basin are mainly explored from the thick Cenozoic sediments.

This study was carried out under the Ministry of Earth Sciences funded project and results have been recently published in the journal Current Science. The research team included Nagarjuna Danda (DST Fellow) and Dr C.K. Rao.