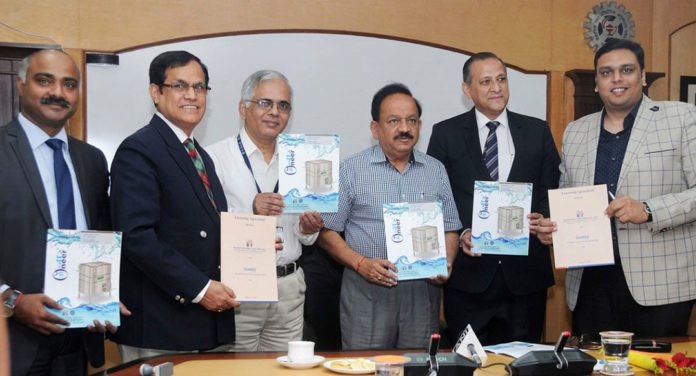 Scientists at the Council of Scientific and Industrial Research’s Lucknow-based Indian Institute of Toxicology Research (CSIR-IITR) have developed a technology for disinfecting water that promises to provide safe and clean drinking water at a cost of just two paise per litre.

The knowhow has been transferred to a Delhi firm, Bluebird Water Purifiers. The technology is modular in design and can be used both at domestic and community level.

Speaking on the occasion, Science and Technology Minster Dr Harsh Vardhan said the domestic model can provide 10 litres of water in just five minutes and one full charge of the battery. It is designed to last four cycles totalling 40 litres. The community model, at present, has a capacity of 450 litres per hour. It can be scaled up to one lakh litre per day and beyond.

A senior CSIR official noted that a key feature of the technology is that purified water will retain all essential minerals and there will be no wastage as it happens in reverse osmosis (RO)-based purifiers. In addition, there will be no need to add any chemical and the water can be stored for around 30 hours without the risk of any recontamination.

The community model will have in-built smart sensor system that will provide real-time information of all operational steps. It also provides for auto self-cleaning of the system after fixed number of cycles depending on water quality. The system consumes only around one unit of electricity per 5000 litres of water and can be operated with solar power as well. The domestic model can be used at homes, street food vendors and small shops, while the community model is suitable for schools, hospitals, restaurants, bus/railway stations and rural community centres.

The water purifier can eliminate disease-causing pathogens such as virus, bacteria, fungi, protozoa and cyst to provide safe drinking water as per national and international standards, CSIR officials said.

CSIR Director General Dr. Shekhar C Mande noted that a large proportion of India’s rural community still consumed water of poor quality and expressed the hope that the device will go a long way in addressing the issue.