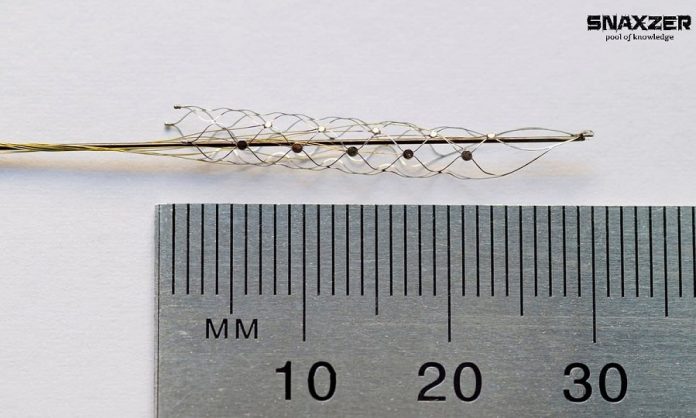 Researchers from Royal Melbourne Hospital, University of Melbourne and Florey Institute of Neuroscience and Mental health, Australia have developed a ‘Bionic Spine’. It is a tiny device which is just 3 cm long and few millimetres wide. It could enable paralysed patients to walk again by permitting them to author bionic limbs with the power of their own subconscious thoughts.

This ‘bionic spine’ which has a size of similar to small paper clip and will be settled by next year inside three patients at the Royal Melbourne hospital, Victoria. Those patients will get select from Austin Health Spinal cord unit. They will be the first humans to trail the device, which so far only been tested in sheep.

Thomas Oxley, from the Royal Melbourne Hospital and Florey said, “Our vision through this device is to return function and mobility to patients with complete paralysis.”

Up through blood vessels, which leads to the brain, a doctor will make a small cut on the patient’s neck and feeds a bionic spine (which is Catheter contained), until it reaches to motor cortex’s top, the brain part at the top of the head which will control movements. By leaving the bionic spine inside, the catheter will then be removed.

The outside of bionic spine is enclosed with 12-electrodes. That will check signals from the motor cortex and then send it towards a small device that will be fitted inside the patient’s shoulder. After that, a device will transform those signals into commands, which will be fed to the bionic limbs via Bluetooth for ordering them to move.

Dr Nicholas Opie, co-principal investigator and biomedical engineer at the University of Melbourne said, “It is a straightforward procedure that will take only two hours. This is a procedure that Royal Melbourne staff do commonly to remove blood clots. The only difference is, with our device, we have to put it in and leave it in.”

Head of Medicine department in the Hospital of Neurology, Prof Terry O’ Brien said, “The development of bionic spine was ‘holy grail’ for bionic researchers. While patient would initially have to be thought to think of moving their bionic limbs, over time these thoughts should become subconscious as signals from the brain were more readily converted into movements. The ‘Bionic Spine’ would not repair damaged pathways in the brain, rather it would help the brain to find new ways.”

“For example, if I want to pick up a phone, but my hand is paralyzed, I can use my other hand to pick instead. You have a normal way to use the brain to pick up the phone, but if that doesn’t work, you find another way. Your brains learn another function can be harnessed to do what you have lost. What the stent is doing is putting a recorder over signals in the brain and providing then a conduit to move the limb via those signals bypassing the damaged area.” he added.

There are already various devices disputed to allow paraplegic patients to do movements by using their thoughts like exoskeleton limbs, craniotomy surgery, mind-controlled robotic suit. However, these invasive techniques may lead to risks of infections and other complications.

As compare to this device, the bionic spine is less invasive and less bulky.

Opie said, “The trail of the device would take place in patients with lower-limb paralysis first because they were among those with the most to gain from the technology. Before the device is inserted, we will get patients to de tasks where you can see areas light up in their brain, we might train them to move computer cursor so we will get a couple of different regions that become active.“

Then he said, “The device would be planted in the same place as this area of brain activity and if successful, it could be refined to help patients with conditions like epilepsy, obsessive-compulsive disorder and Parkinson’s disease.“